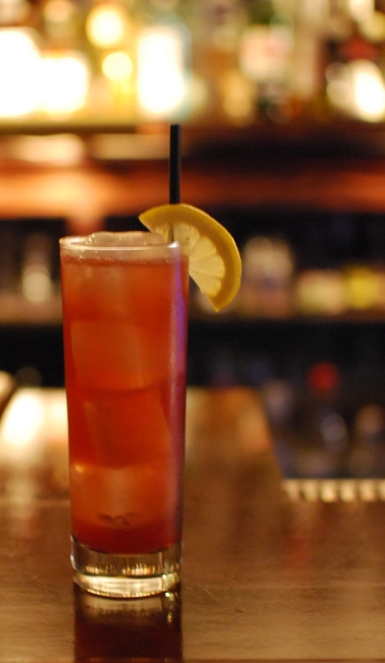 A student last weekend suggested that a new Collins ought to named after Barnabus Collins within the week.  If you are someone who has seen the old vampire soap opera, Dark Shadows, you will know that Barnabus Collins is a member of the Collins family of vampires – and that the Dark Shadows film is about to be released.

Of course the drink must be a Collins – or a charged punch made by the individual serving.  John Collins legendarily scaled the recipe for the Limmer Hotel Punch to single portions to satisfy continued customer demand after the bowl would run dry.

Since the Dark Shadows story is that Barnabus Collins was born in the 1700’s, I wanted most of the ingredients in the drink to have history stretching back at least that far.  I also wanted the color of the finished drink to be like a little reminiscent of blood.  It is based on three spirits: brandy, traditional rum and Batavia arrack.  It is modified by ruby (or reserve) Port wine and accented by ginger ratafia liqueur (such as Daomaine de Canton or The King’s Ginger).  Here it is:  (Click on the recipe image below to enlarge it.)