Until the Volstead act, and for some time after, the standard serving of liquor per order was the jigger, or two fluid-ounces.  If the liquor were to be made into a mixed drink, it was still made of a jigger of liquor.  If there were more than one liquor in the drink, the total would still be a jigger.  That meant that the cocktail goblet below would hold both the Brandy Cocktail and the Dundorado Cocktail (or Manhattan, Martini, etc.) to virtually the same fill point — the volume of which it was designed for.

Other types of drinks require other types of glassware, but can be found in standardized volume per type of drink.  Maintaining the jigger as total lets any individual drink within the same type fit the appropriate vessel.

The jigger is why American bar-tenders of yore never bothered with trying to remember sets of willy-nilly amounts for liquor in drinks.  They spent more mental energy on everything else going on in a drink.  This is why they were more aware of what to do with two fluid-ounces of liquor to get the desired character for any particular type of drink.

If splitting the jigger into two equal parts (of one fluid-ounce each) did not satisfy the taste of the customer, other splits of the jigger could be used.

Anyone who can’t find a satisfying multiple-liquor proportion within two fluid-ounces [60 ml.] is just being dull-witted.

Why not teach bar-tenders the tradition that a drink shall contain two fluid-ounces of total liquor, and that they should proportion multiple liquors according to the type of drink and the presence of other types of ingredients, rather than hand them a couple of dozen recipes and ask them to memorize them?  The total amount of whiskey and vermouth wine in a Manhattan Cocktail should be two-fluid-ounces , and where within the jigger one draws that line is like done-ness in steak — a matter of preference.

Why not encourage bar-tenders to become intimate with actual mixology?  The traditional approach of a jigger of total liquor per drink makes that a lot easier to focus on different types of drinks rather than memorizing their recipes.

Is everyone so hidebound to post-prohibition practices that they cannot see the good business sense in this?

Come on — get the right glassware, make drinks the traditional way, let your bar-tenders learn the old drink intimacy, and make more money by selling more drinks per customer visit.

P.S.  Below are all the measures anyone would ever need to split the jigger all the way down to twelfths, or more.  In addition to the exact-tool splits below, many others can be achieved.  For example, to get a 7:1 split, measure 1/4 pony of a modifying liquor using the 3:1 split pony and pour it from that into the full-sized jigger, and then fill the rest of the jigger with a base liquor.  The possibilities are almost endless. 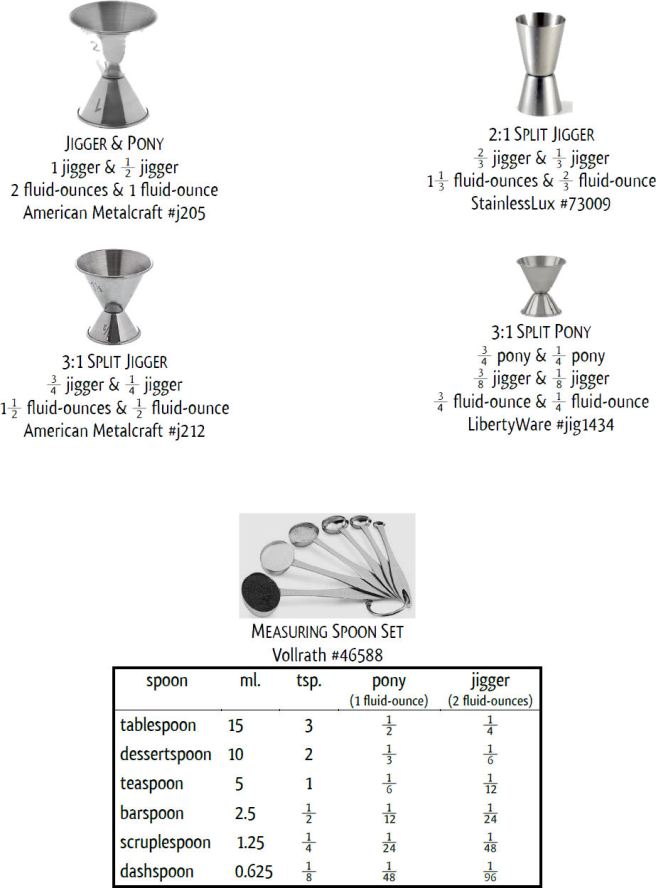