Today’s drink of the day is the Southgate Cocktail.  It comes from the book recipes compiled by Joseph Taylor while working at the Waldorf Hotel bar between 1894 and 1920.  Taylor’s collection of recipes was later published by A. S. Crockett.

If we can assume that the drink was named after some notable person in the area of New York City before 1920, we can wonder if that person was Harry Southgate (who famously filed suit against a dinner guest once for “alienation of the affections” of his wife), or if it might have been Helen Southgate (who seems to have either; shot and killed Henry Grosvenor Barbour and then shot herself less-fatally, or was shot and wounded by him before he fatally shot himself).  Perhaps it was named after the Southgate family in a serialized tale of fiction that was appearing in newspapers at the time. 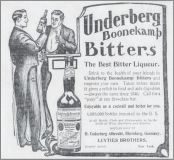 The Southgate Cocktail is nothing more than an Old-fashioned Whiskey Cocktail with Boonekamp as the bitters.  The drink is tasty, and reason enough to go get some Kuemmerling or Underberg Boonekamp bitters.  Note: both Kuemmerling and Underberg long ago dropped the word ‘Boonekamp’ from their labels, but both are still Boonekamp bitters — in fact the world leaders for the type.  Click on the recipe image below to enlarge it.

One thought on “Drink of the Day — The Southgate Cocktail”